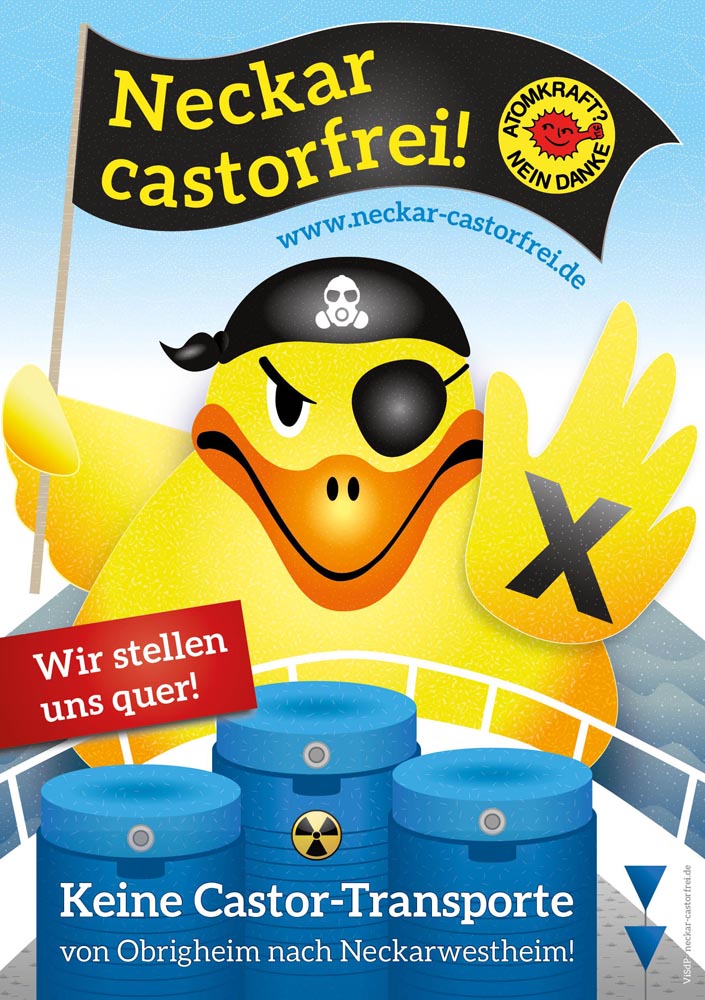 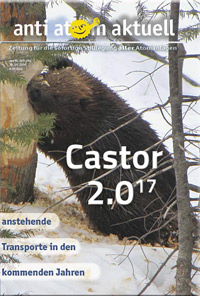 The EnBW successfully refused to build a storage facility at the Nuclear Plant in Obrigheim. Now in collaboration with the Green/CDU State Government, EnBW wants to transport the CASTOR's in Obrigheim to Neckarwestheim. The 342 highly radioactive fuel rods from the Obrigheim Facility are to be transported in 15 CASTORS via ship to Neckarwestheim, where a new dock has just been completed. In August 2016, permits for the CASTOR storage were approved.
* CASTOR = cask for storage and transport of radioactive material

Dangerous Nuclear Waste Transport
According to the EnBW plan, 5 Transports are to take place by ship, with each ship carrying 3 CASTORS. EnBW claims that these ships are allegedly unsinkable. This dangerous transport on the Neckar River winds through densely populated areas with a total of 18 neighboring communities. The EnBW believes each transport will take approximately 12 hours. The transport route on the Neckar is approximately 50 km long, with 6 locks and several bridges. Incidentally, one argument from the EnBW for the Neckar River plan, was that the previous Road/Rail Transports were subject to successful Protests.
We are calling for protests along the planned route in advance, to show our rejection of this senseless CASTOR-Transport in a variety of ways.

Even more Nuclear Waste, now in the quarry of Neckarwestheim?
Located in Neckarwestheim is the last Nuclear Reactor (AKW) in Germany to go on-line after Chernobyl, which despite the Nuclear Power phase out, is allowed to produce Nuclear waste until 2023.
This Plant (AKW) has an interim storage facility for 151 CASTOR containers in tunnels in the quarry. Due to leaching, there are huge caverns in the subsoil, rendering it unstable. In order to stabilize the ground and to prevent a further drop in the cooling tower from the still running AKW GKN II, many millions had to be invested in Concrete (see „Behmel-Studie“ - https://is.gd/behmel).

False statement: no "green meadow" possible!
Despite knowing better, the EnBW and the Environmental Ministry, promise a quick „Green Meadow“ in Obrigheim and Neckarwestheim. In both locations, the existing Nuclear Plants are to be eventually demolished.
Hundreds of thousands of tons of radioactively contaminated materials, which are permitted to enter the recycling stream via the so-called "Freimessung", present a health hazard. These materials are for example, later used in road construction, etc.
At both sites there will be contaminated material that remains. This material is planned to go to Konrad Mine. At both sites, there are highly radioactive fuel rods, generated from electricity production. This will radiate for thousands of years. There will never be a „Green Meadow“.

In Neckarwestheim, this interim storage facility is permitted until 2046. By then, a so called „final Storage“ will not have been created, what will happen next?

For decades unresolved:, how to handle Nuclear waste long term?
Since 2005, the reason for the nationwide „local interim storage“ plan was and is, to take the wind out of the sails of the nationwide CASTOR resistance and to make possible the continuing operation of the nuclear power plants. A political decision was made, that no more CASTOR transports would go to Gorleben, or to the Plutonium factories in France (la Hague) and England (Sellafield). At the same time, the communities with Nuclear power plants, were lured with the Agreement, that these local interim storage facilities would only be permitted for 40 years. Now there is a "small nuclear problem" with the disappearance of nuclear waste.

Konrad Mine for the „so-called“ weak and middle radioactively contaminated waste?
Legally and politically, Konrad Mine is the site for disposal of weak and middle radioactively contaminated waste, although it's suitability is questionable. This was pushed politically under licensing conditions, which today are no longer applicable. Greetings from die Asse! Konrad Mine should already be in service, but during the expansion phase ran into time delays. The many thousands of barrels (a number of which are already rusted though), in storage at the existing facilities are to be be taken there, as well as waste materials from the demolition of the plants which cannot be released in the recycling process. It is more than questionable if Konrad Mine will ever function as planned. In the meantime, there is more than double the amount of weak and middle radioactive waste to be stored, than there is room in Konrad Mine.

Highly contaminated waste – where to?
CASTOR containers from the existing on site Storages, CASTOR containers from the Plutonium Factories, highly contaminated demolition waste, all this should disappear into a final storage Repository. The new magic formulas are the „ Standortauswahlgesetz“ (Location selection law) and „Endlagersuchkommission“ (final Repository search committee). The time-line: by 2031 the Bundestag/Bundesrat will determine the location for the final Repository. By 2050, this final Repository (Dump) should be in service.
Now, even Bruno Thomauske, who is a Gorleben advocate, and a member of the search Committee, has shown in a study that this timetable cannot be met. According to his opinion, it is realistic that a Repository could be found by 2079, and permitted by 2099. As time frame, it is expected to take 80 years until all CASTOR containers are stored.

Memo: The politicians promise the public, as always, unrealistic fake solutions with regard to the handling of highly radioactive waste. The nuclear plant operators and their political helpers looking for the quick solution, still want the unsuitable Gorleben.

Nuclear Waste Fact: at all of the nuclear power plants, the waste that is stored there will remain for many generations. The promise of a „green meadow“ after the demolition of the reactors and the „disappearance“ of the waste from the local sites will never happen!

free Joomla templates
Back to top